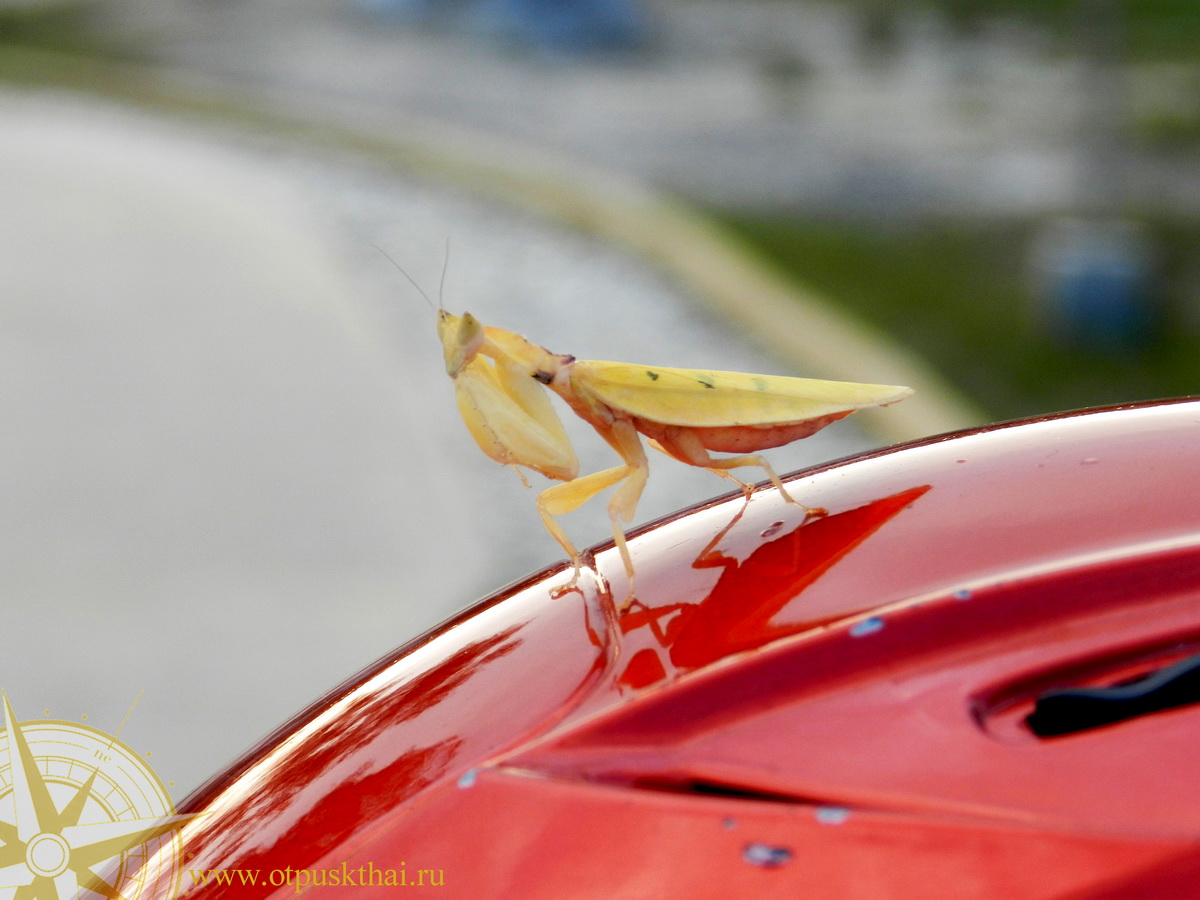 Going to Thailand, every second reflects on what insects live in Thailand and they can represent what dangers for the person.
In the hot country where all year long warm weather, have found the haven of thousand kinds of insects. They, as well as everywhere in the world, have appeared here millions years ago, long before occurrence of the person. Considering this fact, it is necessary to understand that it we at them on a visit, instead of they to us have run. So it is not necessary to feed illusions about utter annihilation of especially annoying insects, operate locally and reconcile to a deja vu.

Mosquitoes in Thailand
Let’s begin transfer of insects with a mosquito. Of it are afraid more than the others because some kinds are carriers of Denge. The Keyword here “some”: it is necessary to be careful of black mosquitoes with white strips (or specks) on pads and a body.
There is a set of versions of mosquitoes in Thailand. From the small and translucent to the huge dark. The the mosquito is more, the he more slowly.
It is necessary to notice that mosquitoes in Thailand behave a little in another way. They do not sit packs on a ceiling when you turn on the light, and many of them do not publish a sound. Fly, as flies: that slowly quickly, sharply change a flight trajectory, fall to floor level, can sit down on a floor and even to walk on a surface! Are not frightened movements and jolting so is useless to try it to brush away. Having bitten once, the mosquito flies on other place, therefore on a body can be to ten stings of all from one mosquito.

Flies in Thailand
Flies here same annoying, as well as everywhere. Do not leave meal in an open kind for a long time that they have not stuck round her. The same with the filled glasses.

Ants in Thailand
One more importunate insects to horror are ants. Any colours and the sizes they can be met not only on the nature, but also at home. Here a universal remedy for schooling to an order! It is a question not that ants will take away meal on holes, and that many of them can attack and painfully bite.
Special aggression is shown by red ants, they still name – red. If to spend a hand over one of such ants it is possible to see how he is ready to attack, dancing attendance and swinging forward extremities. So let the ant hill remains the house for ants, and human dwellings – the house for people.

Flying ants in Thailand
There are still flying ants. When it is raining, their dwellings затапливает, they start to be flied on light where soon fall backwards on a floor. This favourite delicacy of geckoes туке which, taking an opportunity, gorge on them to a sailing.

Cockroaches in Thailand
Especially unpleasantly cockroaches surprise in Thailand, perhaps. First, they here the huge sizes: from a half-palm. Secondly, they fly! It is not necessary шугать this insect therefore as it does not escape more often, and flies up and in a panic starts to rush about on all room.
At night they fly up to the house and on all fours start to search for ways for an input.
In spite of the fact that they black, large and flat, moreover also fly, in it all the same it is possible to learn a cockroach so it even in the street you will not mix with other harmless bug.

Termites in Thailand
Termites practically do not live in houses. Meet near the house is more often and are fine snack for birds. If termites appeared in the house it is possible to address to owners – after all they will gobble up their this property, if that.

Мешочники in Thailand
Many are puzzled with a question: «that it for cocoons hang on walls in the house?». Pendants appear on a ceiling, furniture, more often on walls, move from place to place and in due course also mysteriously disappear, as well as appear. Sometimes from a dry flat grey cocoon the larva similar to a worm which starts to move is shown, dragging behind itself the small house. Surprisingly, but the future insect with the same success can get out and on the other hand and to go in the opposite direction.
Eventually, from a cocoon there is a front sight with transparent wings.
The secret is solved is one of versions «мешочника». It is not necessary to confuse to a dung of geckoes.

Mantis in Thailand
Quite often in the house fly mantis, the size from two to ten centimetres. Indoors they behave inertly, therefore they can be caught and taken out on street. But consider also that fact that having scented approach of the person, mantis can start to fly on a room, as the big plane which has run away. Therefore, if nearby there are impressionable persons, which are afraid of insects to leave better it for a short while from a room.

Spiders in Thailand
It is possible not to be the biologist to understand that spiders in Thailand hundreds kinds. They are distinguished by the size, colour, a colouring. Meet absolutely hardly appreciable, as motes. Unlike mosquitoes, spiders people do not interest. So it is simple with a view of an aesthetic kind, collect a web from walls and ceilings.
Be attentive on the nature and in caves as spiders happen not only house.

Multilegs in Thailand
Many confuse a multileg and сколопендру. A multileg quite harmless гусеничка in a firm armour. At the slightest touch, she is turned off by a ball, and some time lies motionlessly. Loves dampness, therefore she can be found under a street flowerpot or stones. In the house creeps seldom.

Scolopendra in Thailand
Concerns insects dangerous to the person. Unlike a multileg, she more flat, pads at it are placed on each side, on a head short moustaches and jaws. In search of comfortable conditions can creep in the house. If the house is attacked by insects in him never it is necessary to disregard small children and pets.

Scorpions in Thailand
The scorpion in Thailand can be seen not only during show, but also on the nature. In dwellings they, as a rule, do not aspire, and here in mountains – you at them, as on a visit. During safaris-rounds do not lose a head from smart kinds and periodically look, where you are going to come and where to sit down.

Snails in Thailand
With darkness approach, in a court yard there is a set of snails. Not a small ground them it is possible to count some tens. During time of a heat they hide in shady places. Snails in search of a moisture creep out and eat nonpoisonous plants, as an example: they leave a dieffenbachia not touched.

Butterflies in Thailand
The most pleasant creations on the earth, in Thailand are presented by a large quantity of kinds. It is necessary to admire not only a bright colouring, but also unusually big sizes of some copies.

Dragonflies in Thailand
In Thailand, also dragonflies certainly are found, only is more often they remain without attention of tourists.

Bees in Thailand
In Thailand too are engaged in cultivation of bees on apiaries, collect medical But they meet and in the usual environment. It is possible to find out a beehive which was twisted by wild bees directly on a tree.
By sight wild bees faded and small – are very similar to flies.

Cicadas in Thailand
Having called in far away in jungle, places, it is intolerable loudly the sound unlike on any another reaches. It with the big success can be carried to mechanical sounds, rather than to nature sounds. So cicadas communicate.
Many ask a question: «As cicadas look?» And so, it is large bugs with the big transparent wings, on pads – jags, as at a grasshopper.

Glowworms in Thailand
If it was necessary to come back from mountain in a night-time it is better to go at more low speed, than usually. On light of headlights insects continually fly, sometimes through road bats fly. Glowworms quite often accompany – in their dark jungle white-dark blue огонечки are clearly visible. A bewitching show.
At night days their not importunate serenades are clearly audible.

Grasshoppers in Thailand
Because of violent vegetation of a grasshopper practically it is not visible. It manages to be made out only when he comes on a verandah or to the house. Green and grey-brown, they well mask in greens, than rescue itself from enemies.

Because of a heat some insects happen not in themselves: go to the house to be cooled, reaction at them braked so that it is possible to take them in hands. Wishing not to do much harm, take a small being accurately not to rumple wings and not to break an extremity.