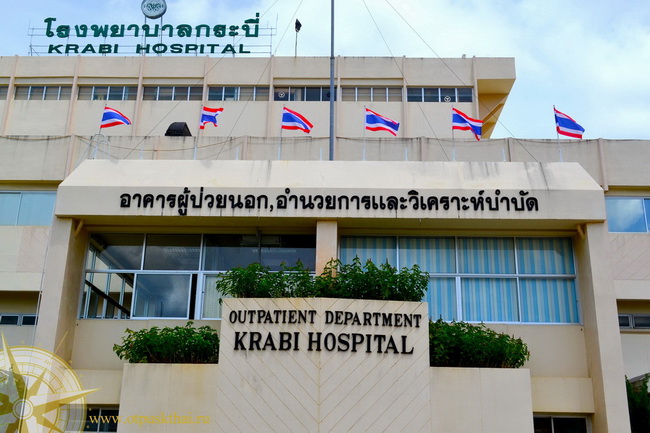 Hospitals of a Krabi town

In our life, as well as in life of many people, one turn of events another is replaced. Sometimes change occurs to the best, sometimes differently. Here and our wonderfully spent holiday on a Ko Lanta a week later was replaced by experiences concerning state of health of the son.

All has begun three weeks ago when we were for Samui. Our sonny has got a splinter into to itself in a heel a tiny splinter. We have pulled out that stuck out outside and have processed a wound. Then the child never complained of a pain, and the wound did not cause any suspicions. After three weeks, putting the child to bed, I have slightly pressed to him the cone formed under a skin on a wound place. The son, has drawn aside a leg and has told “check”. Since the morning we have first of all gone to hospital. By this time we have already moved to a Krabi, therefore have gone to search for inexpensive hospitals of a Krabi of a town. To us the Krabi Hospital has got to the first to a Krabi. Where there is a Krabi Hospital it is possible to read in the end of a post. 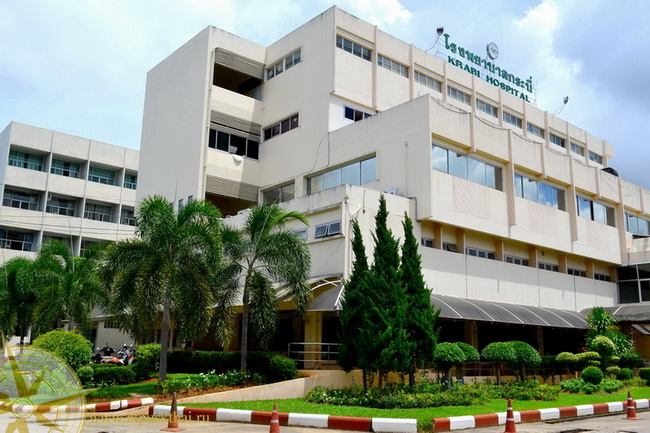 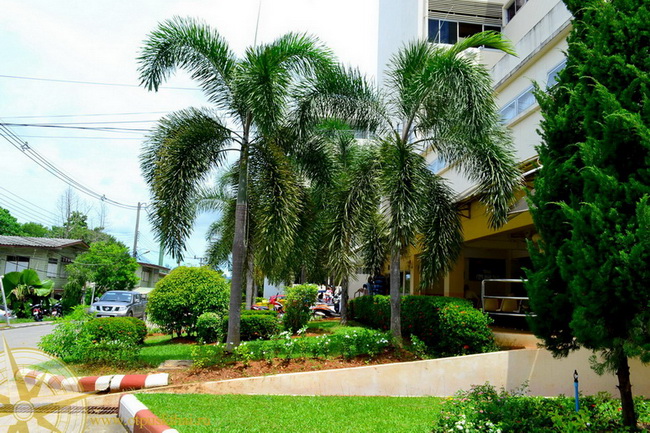 I with the son have approached to a rack with inscription Information and have tried to learn, how many there is an appointment in a Krabi Hospital, and also, in operation on a heel of the son how many will manage. The employee of hospital of a Krabi, having called by someone to phone, has informed that is possible around 1000 bath. As it was our first visiting of the doctor to us have suggested to fill a card in which it is necessary to specify the standard data: a surname, № international passports, a floor, date of birth, citizenship, the address of stay in Thailand (the hotel name), marital status, weight, allergic reactions and other. Half of card appears in Thai language, therefore employees help you with translation. Near a window of registry for convenience scales are established. Necessarily, going on an appointment, it is necessary to take with itself the international passport. 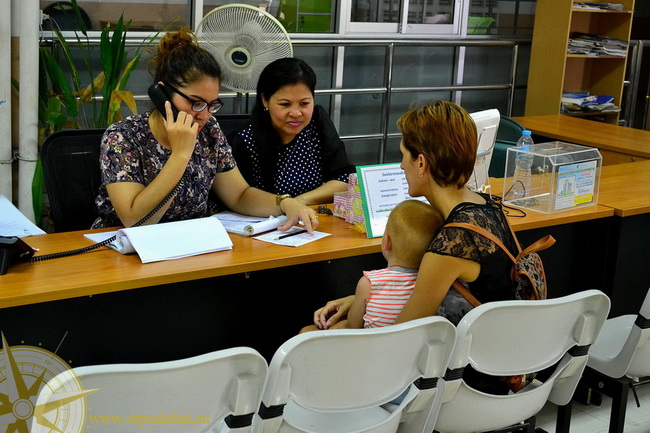 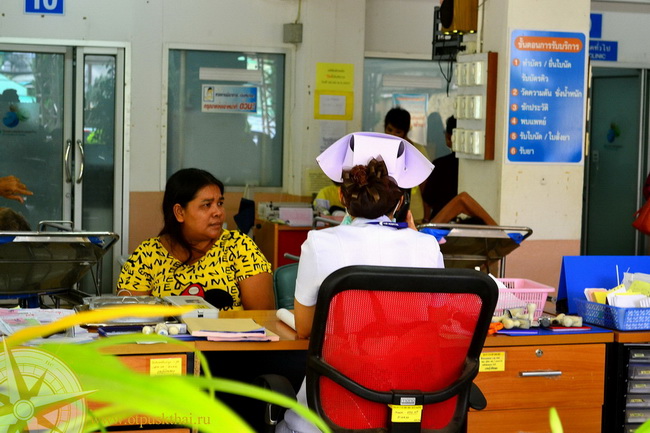 With the filled card between the second and third window of registry Krabi Hospital it is necessary to take the coupon with turn number (the black arrow specifies in the device under large figure one). On an electronic board number of the coupon and a registry window is highlighted. All halls for expectation spacious, on ceilings are established fans, for patients plastic armchairs are provided. 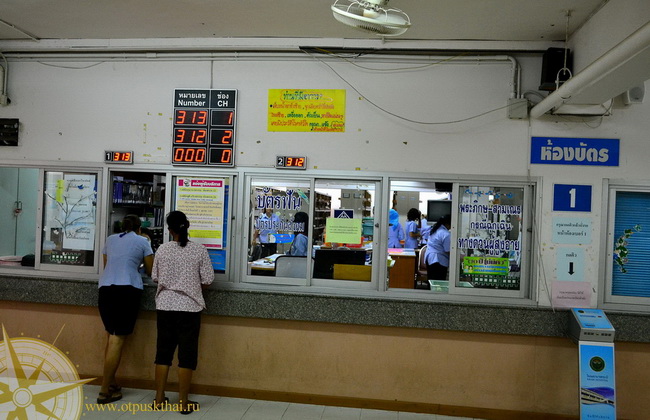 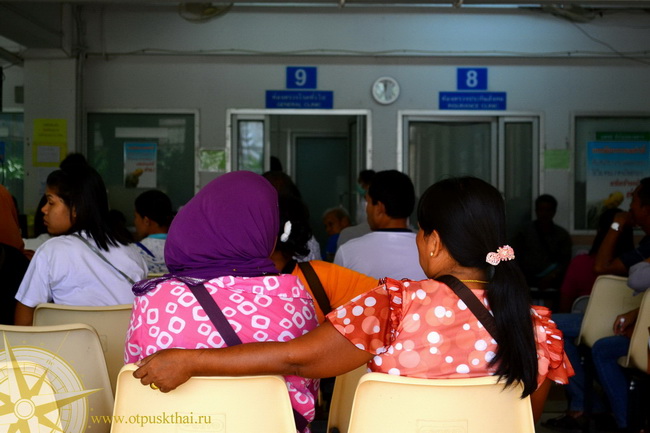 Having approached to a window, we have transferred to the employee the filled form and have described a problem. I have again tried to learn approximate cost. The cost question worried us therefore as very long ago we live in Thailand without the medical insurance. And if we already know where there is a cheap hospital on Samui on a Krabi of such information at us yet was not. By the way, the Krabi Hospital works and with the insurance companies. 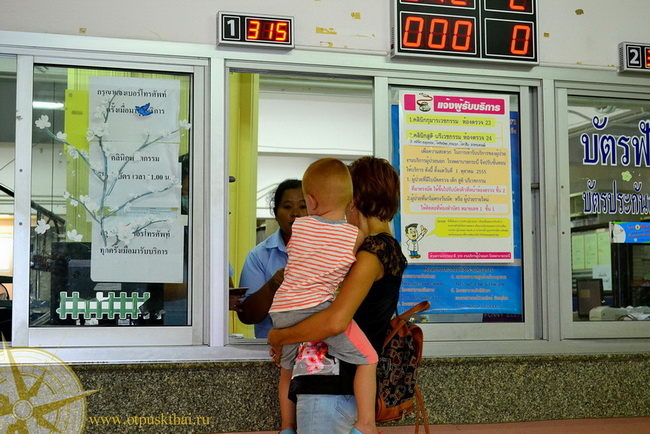 The girl in a registry window could not consult us at the price, has given out a pack of papers and has informed that we need to proceed in Emergency where render the emergency help. 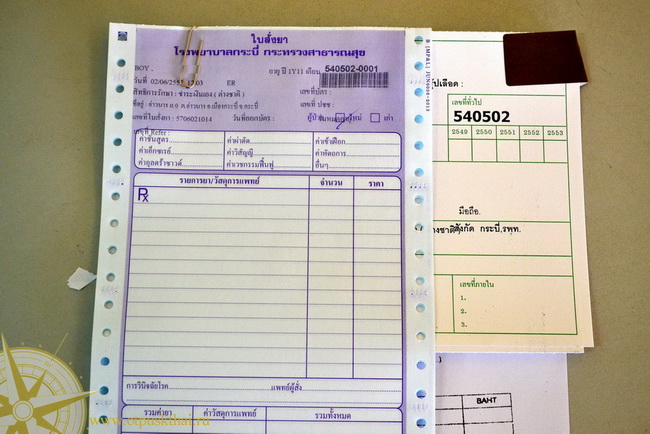 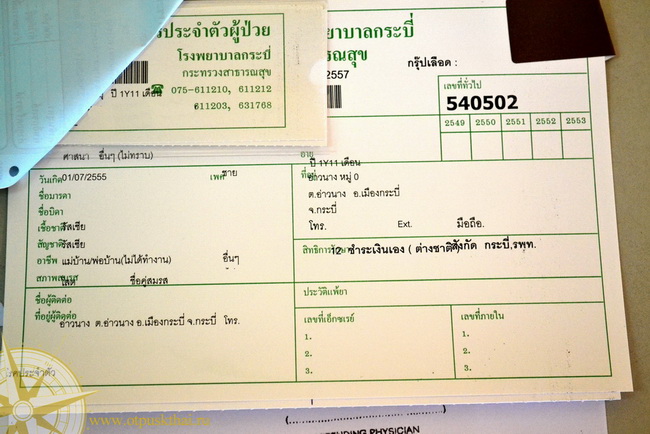 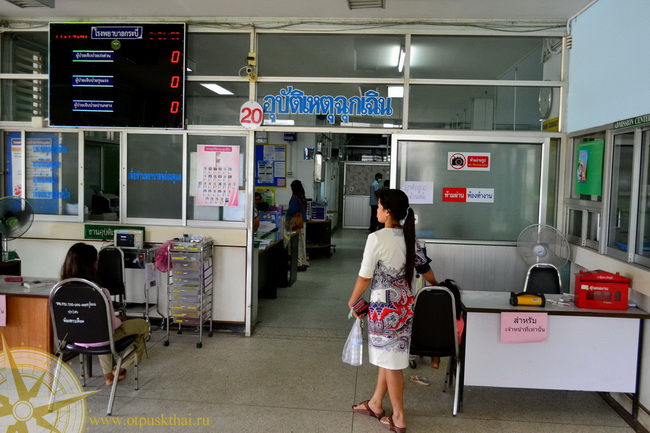 My husband has gone to the nearest Krabi Honda Center for passage THAT. We with the child remained to wait, when us will accept. After half an hour, to us there was one of nurses and has informed that we need to pass to the doctor who will begin work at an o’clock thirty. Time was more enough, therefore I with the son have gone to have a bite. Directly in a building of a Krabi of Hospital are located pair of little shops with mass-media and other trifle, and also small cafe. In assortment basically products from an air fruitcake and other sweets. Cost of a box with balls-doughnuts in powdered sugar only 15 bath, the prices for the rest approximately in this range. Ice teas 28 bath. 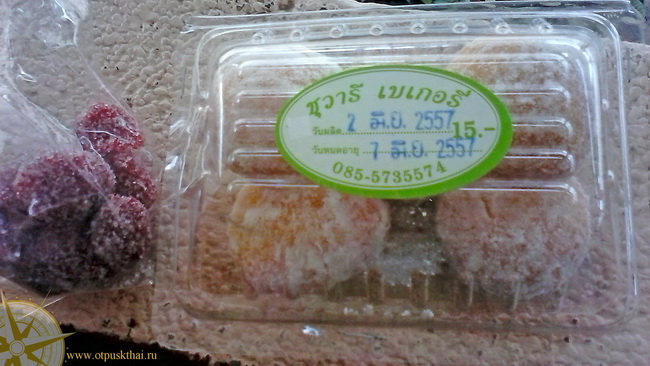 In due time us have accompanied to offices on the second floor. In turn on reception to the doctor with us there were Thais, a couple of foreigners and a trance. All patients get to the doctor in turn under the invitation of medical staff which sits there and then at tables. No vanity, a crush and priorities between patients is present. Having got at first to an office 22, and then 23 we have received consultations of doctors of hospital of a Krabi. 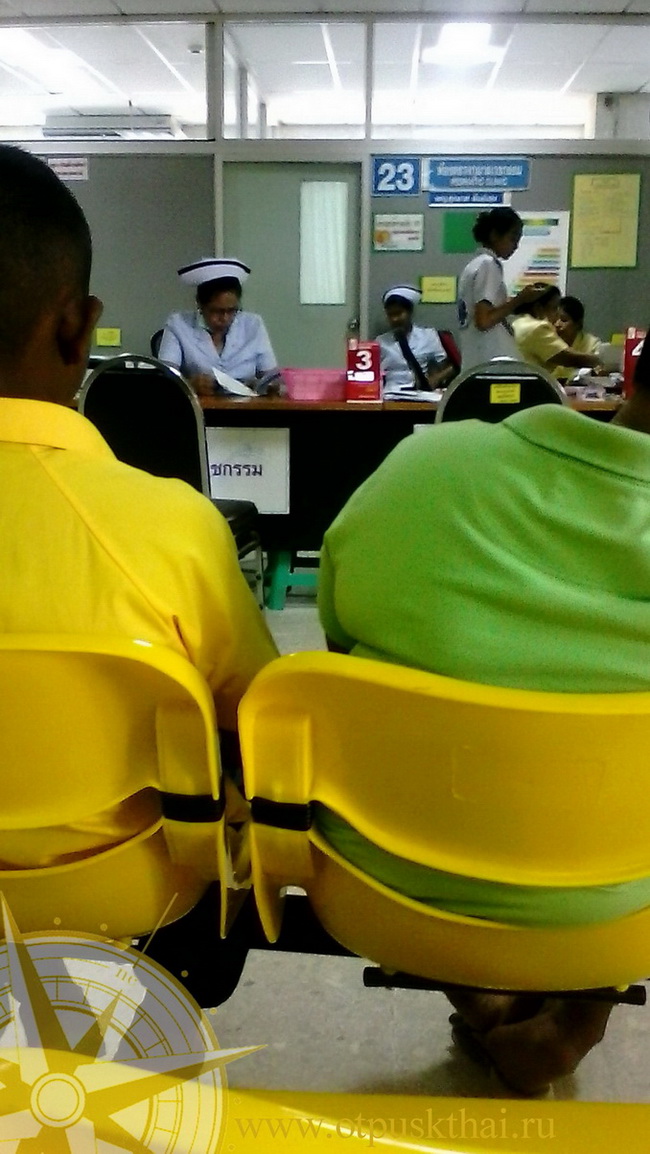 Without X-rays, doctors have one after another told that think that there something is and it is necessary to do operation. We have discussed that the narcosis will be local. Then with directions on operation we have gone on the third floor in operation room. We should see a doctor preliminary, and operation has been appointed next day. In the first day for reception of doctors from us did not take copecks. 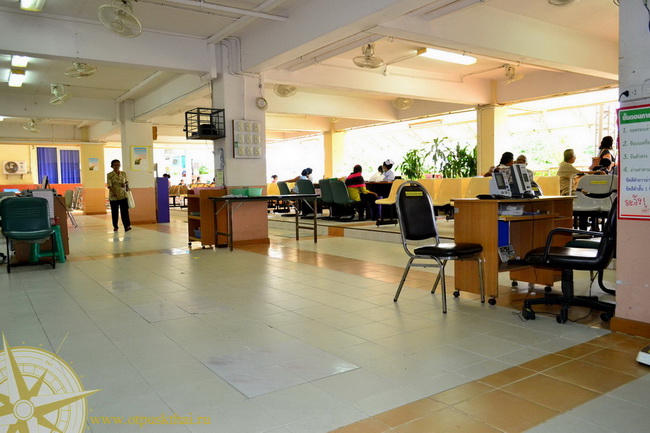 After visiting of doctors Krabi Hospital I have asked the husband to bring us to other hospital. It is inexpensive, but good Muslim hospital (Jariyatham Ruampat hospital). The address of Muslim hospital is specified in the end of article. 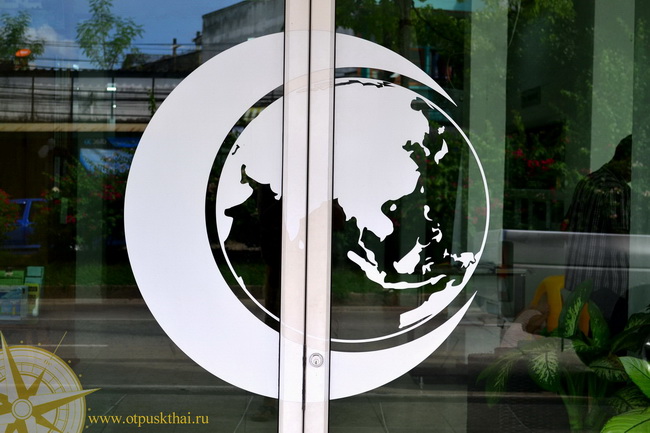 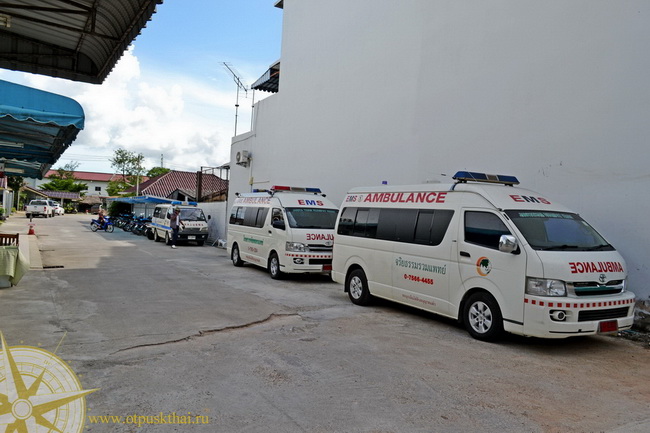 The small hall with registry and offices reminds a hotel hall more. Instead of plastic hospital armchairs here there were convenient sofas, and for children some toys are exposed. 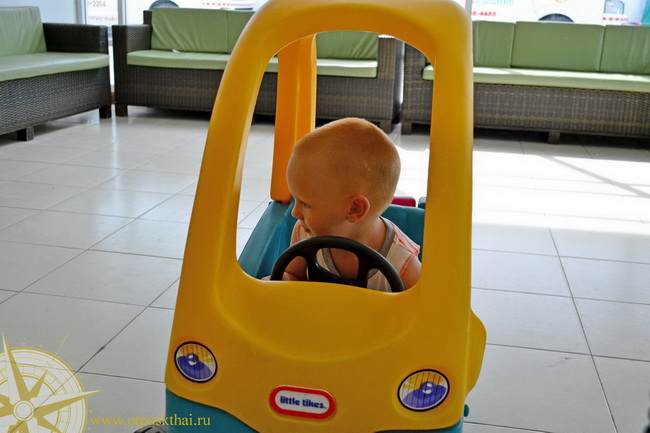 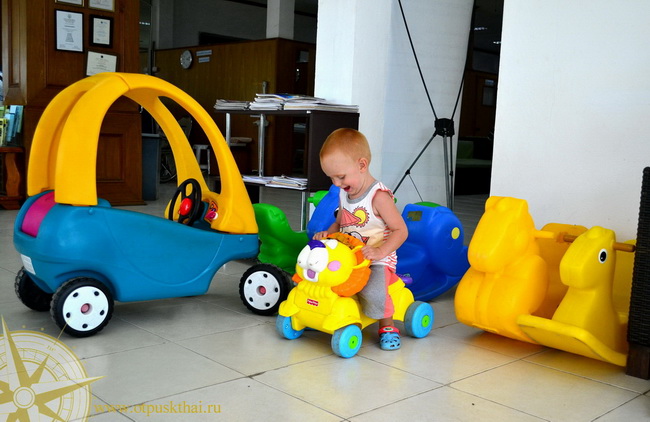 Unfortunately, the doctor has informed that their hospital small and at them is not present a X-ray, and also they cannot perform operation. Also has suggested to go to larger Krabi Hospital or if it was not pleasant to me, in Krabi Nakharin International Hospital. In Muslim hospital of a Krabi for an appointment from us too did not take money. 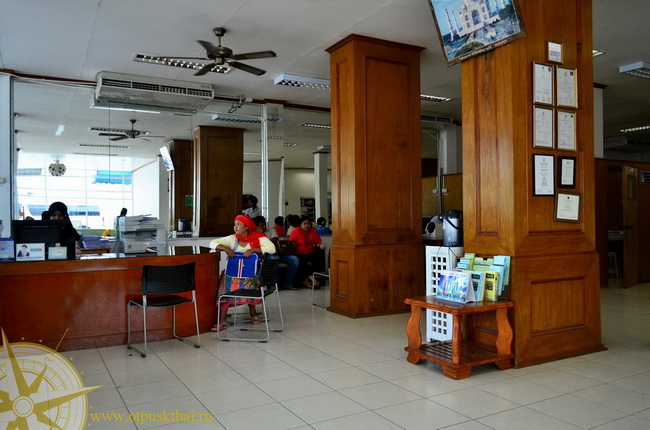 As the coupon on operation from Krabi Hospital was already at me in a pocket, and on hours four evenings we have gone home, having dropped in at first on the market conveniently close Jirayatam Ruam Paet private hospital. 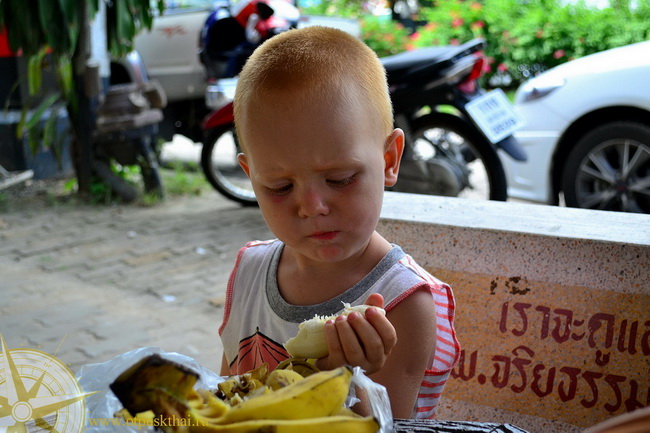 Next day, as to us it has been appointed, to 8:30 mornings we were on a place. At 9:05, when our turn has approached, the nurse has given a spoon of a syrup and has commented that as will try local anaesthesia it is necessary to give soporific. In fifteen minutes the medicine should work. But on the child who has slept after night, soporific has not rendered due influence. As a result of us have invited in one of operational, have fast put on the son a mask with the general narcosis, and me with the husband have shown the door in a corridor. Time was 9:20.
After twenty minutes me have invited inside, have shown a tiny splinter and have informed that like anything else have not found, but if something remains, in due course leaves. They have decided not to sew up a wound, that there were no problems with a seam in the future. But I should go every day on bandagings, before wound healing. Then me have again asked to leave and already at 10:00 have again called, having informed that operation is ended successfully, have given a dressing gown, rubber slaps and a disposable hat and spent to the child.
Operation cost in a Krabi Hospital left for the sum 3628 bath from which narcosis 1850 bath, soporific 938 bath, operation 700, medicines 40 bath, services of the doctor 100 bath. With itself to us have written out paracetamol. 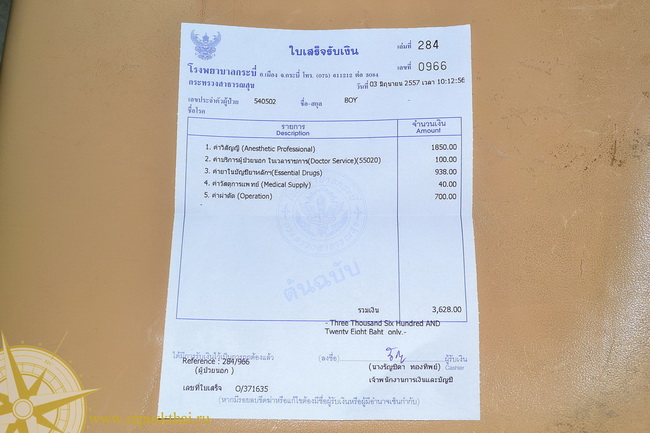 The narcosis has already departed, but soporific did the part, the child slept without having stirred. The nurse began to approach to us with a cold rag, putting it to a forehead of the child, she tried to wake him. Leaving, she hinted that I can wake him. At 11:00 the doctor has compulsorily lifted the child who has woken up and has cried. To me have told quickly to throw off a dressing gown, to take away the child on hands and to go home that we and have made. 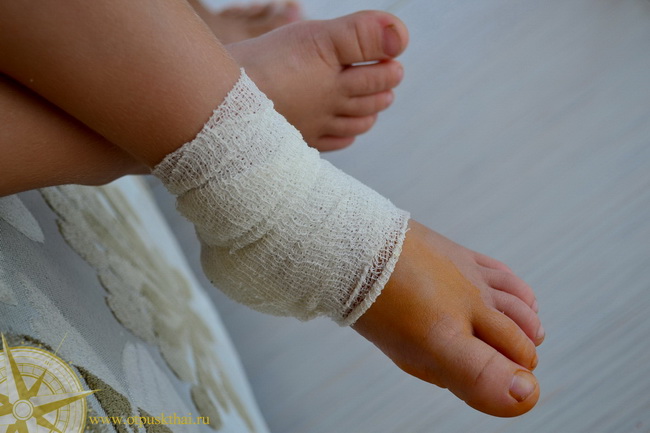 As deviation I will notice that during our stay in operational the Hospital Krabi on light has appeared two children, two new lives, two new occasions to excitement and to pleasure at parents.
The son has overslept to two o’clock in the afternoon. Then has vigorously jumped. To four, again became whimsical and languid, have probably departed anaesthetising, and the leg began to disturb. Driving on a motorbike in search of the doctor in an Ao Nang for the subsequent daily bandagings have a little distracted the child. It has elicited to itself(himself) corn and gnawed it while we went for a drive on different small streets.
In both hospitals of a Krabi to the child have given out by a small card from which we in the subsequent visits to the doctor will not fill the data of the child that is very convenient. 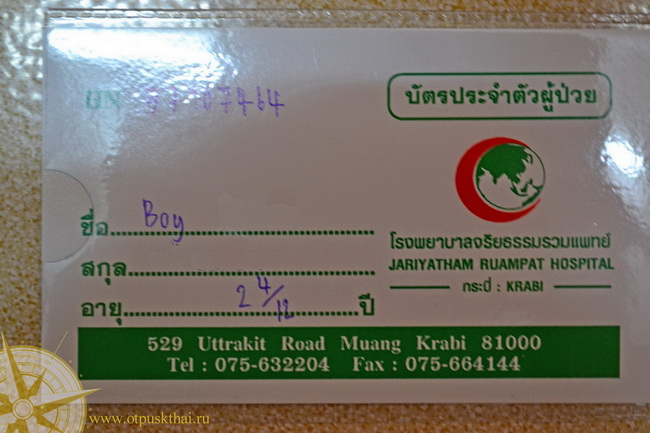 It is considered that Krabi Hospital, as well as Jariyatham Ruampat hospital is a cheap hospital of a Krabi. In both hospitals the personnel affable also knows English. In Muslim hospital conditions are less similar on hospital, than gain, even despite shortage of the large equipment. Anyway, it is better not to get to hospital, therefore it is sincerely desirable all health! 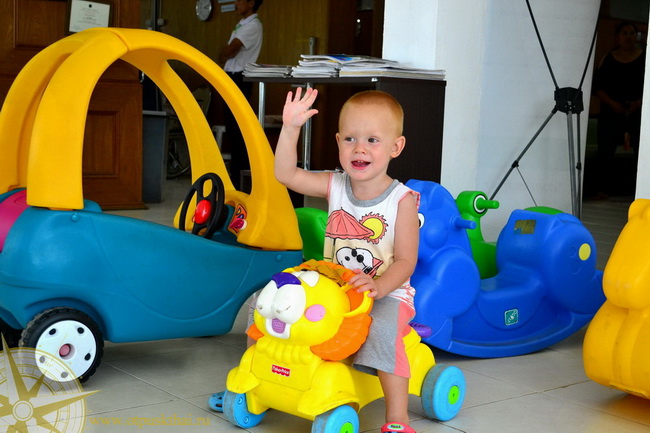 How we went on bandagings to the Ao Nang clinics, a separate post.
Further, I result the promised co-ordinates of a Krabi of Hospital and Muslim hospital.

Addresses of hospitals in a Krabi and phones:

Yours faithfully to readers, Ilona.