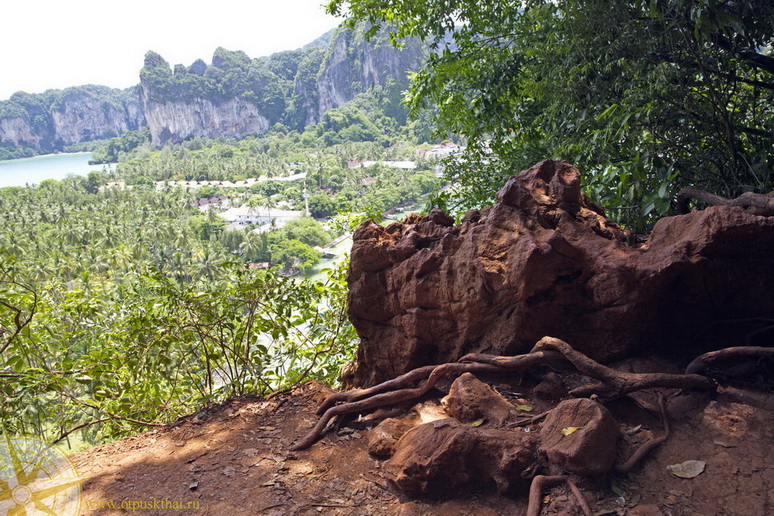 Beach of the Railay (Krabi), a way on Lake of the Princess

The majority of people in the world consider peninsula of the Railay as one of the most beautiful places on the Earth. Fortunately for me I concern the majority. Besides, for quite some time now we began to be content and its other blessings, namely – we develop for ourselves productive leisure. But it is not necessary to worry: to sunbathe and swim for a while in an environment of unearthly landscapes we too we do not forget.

Many tourists come to be engaged in rock-climbing here. On beaches Phra Nang and Ton Sai beach on rocks leaving highly in the sky lines for rock-climbers are located, is on a beach of the Ton Sai and special school, and on Railay East lease equipment.
To climb up on rocks I has not dared yet. But similar I have executed something.
Highly – it is high in a rock there is a mysterious lagoon which we with the husband and have visited by turns. My husband there has gone to last our April arrival on a Krabi. I remained to play a sand with our son. 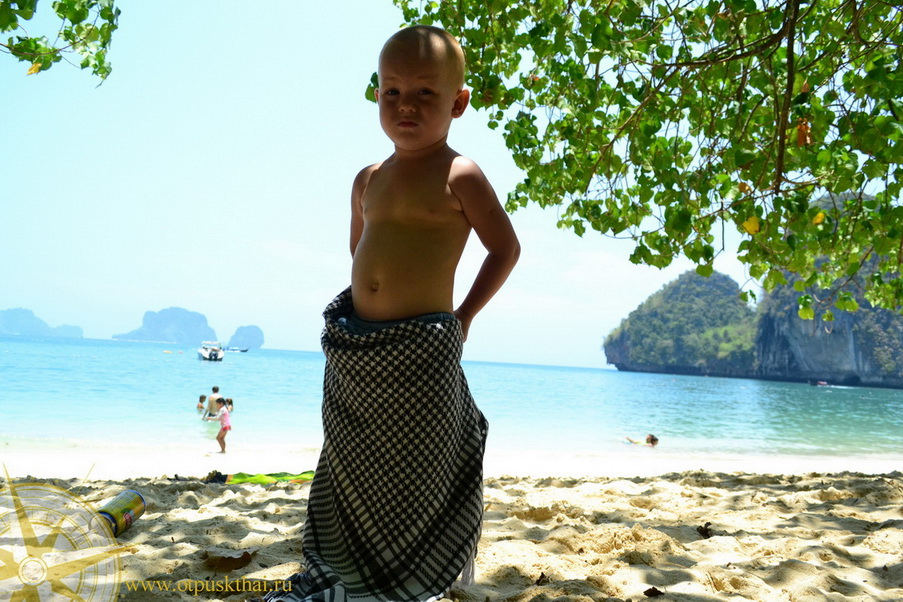 And here in last dates of May has come to subdue my turn one of tops and to see the eyes Lake of the Princess.
On a beach of the Railay we have landed already during the lunchtime. Water stood on the edge of concrete quay of East beach. Inflow has pleased us, since it is kind there was a sign to that above we will find at all do not tin. The lagoon is filled with sea water and depends on inflow and outflow. It is logical to assume, as rains too play not last role, but during a rain lifting to lake categorically is not recommended. 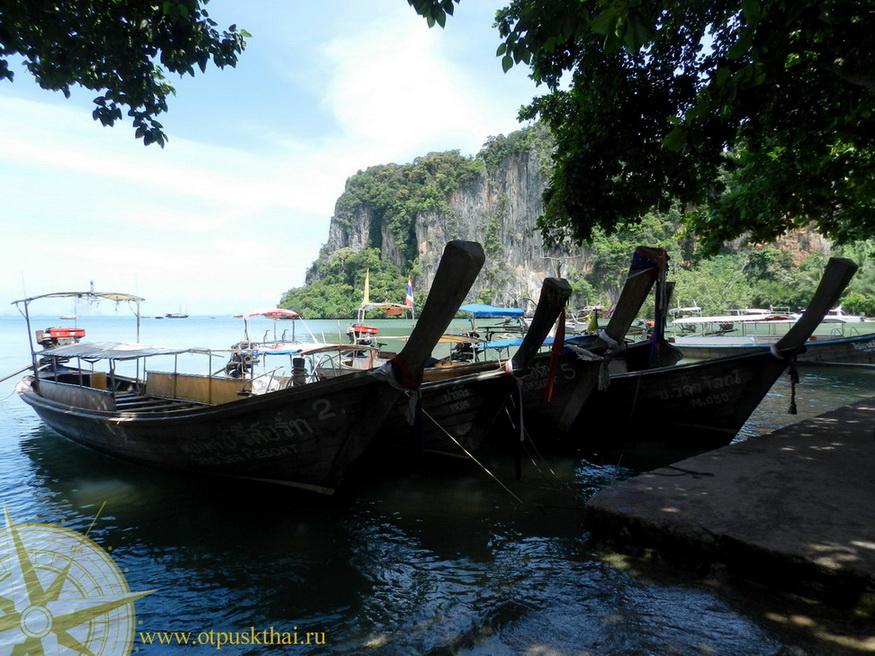 It is necessary to tell that I have never regretted that have gone on top in gym shoes. The clothes form should be convenient, and the footwear should not fly from a foot. I do not represent, as women climbed up there barefoot and in bathing suits though my husband climbed just barefoot. To go down and rise in some places it is necessary literally on sharp stones, dry branches, slippery clay and sometimes having risen in unnatural poses. That is it not so that lay-lay on a beach, has bothered, has gone in other place to be bought. It is better if to visit this sight of a beach of the Railay in advance having prepared and accompanied. 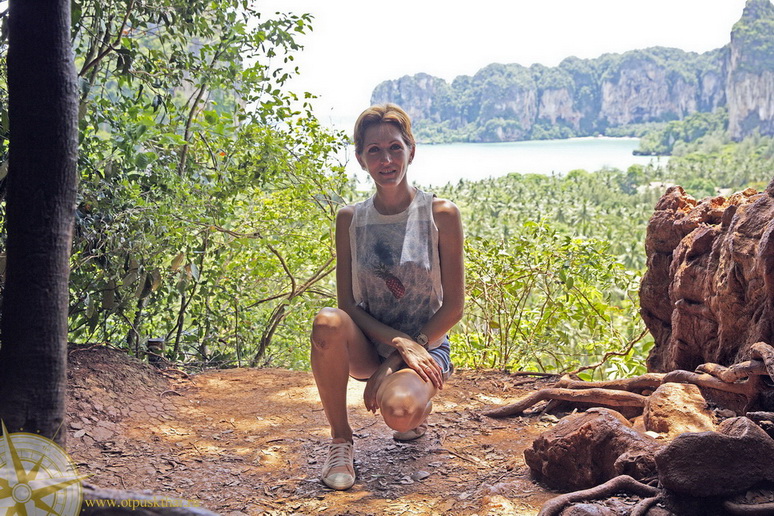 That else except convenient footwear and comfortable clothes it is possible to take with itself, I will tell on a course. So, the first lifting needs to be overcome, rising on a vertical footpath from red clay breed and stones, keeping for a rope. Only above you notice your body has how much wetted through. That I literally all became as after a shower, I was slid off continually by shorts. Though they to me very much even on the size. 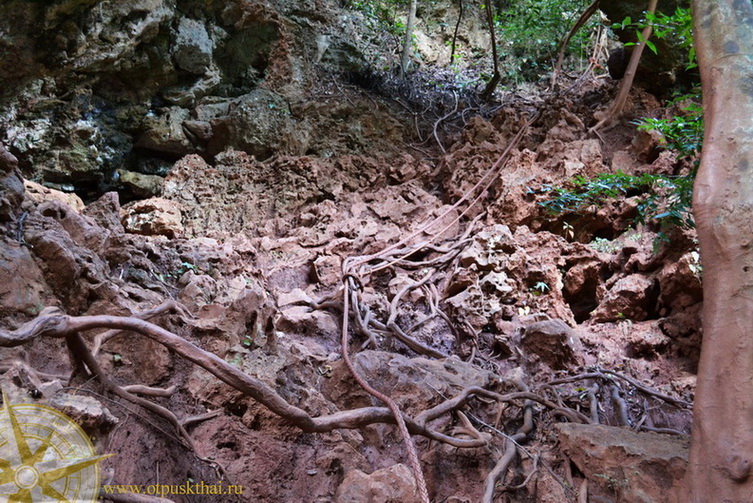 On the first pass, having curtailed on the left, metres through 50 you get on I twist a point (view point). From a survey platform the finest kind on the Western beach of the Railay, East Railay and a beach of the Ton Sai a scourge opens. From height the territory of expensive hotel is looked through. An abundance of palm tops this landscape reminds me Samui. 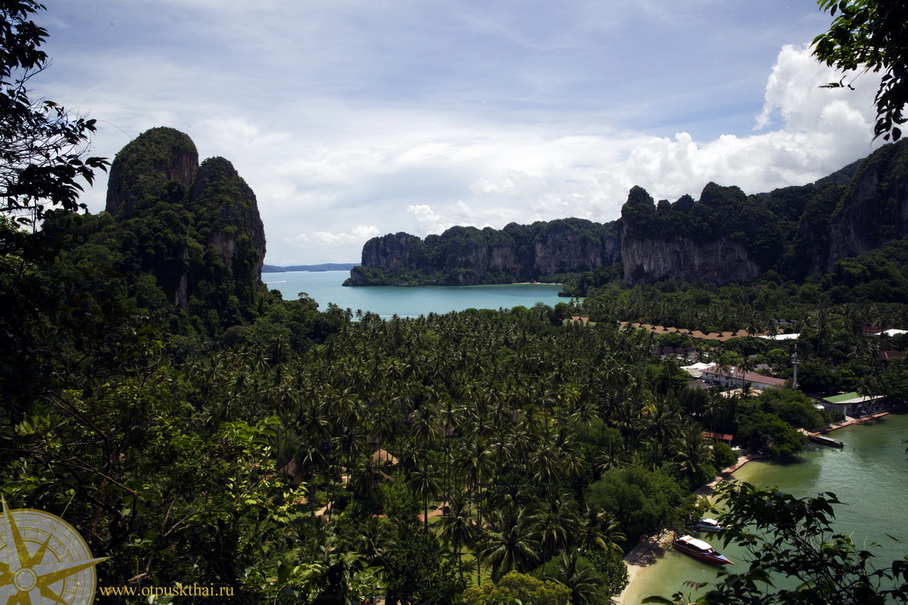 From a survey platform we have gone on a short path before which on the index it has been traced: 200 m to lagoon. Almost to the lagoon it was necessary to go practically on an equal track. Walk on jungle does not suffer haste. We have found time to stop and look round around. 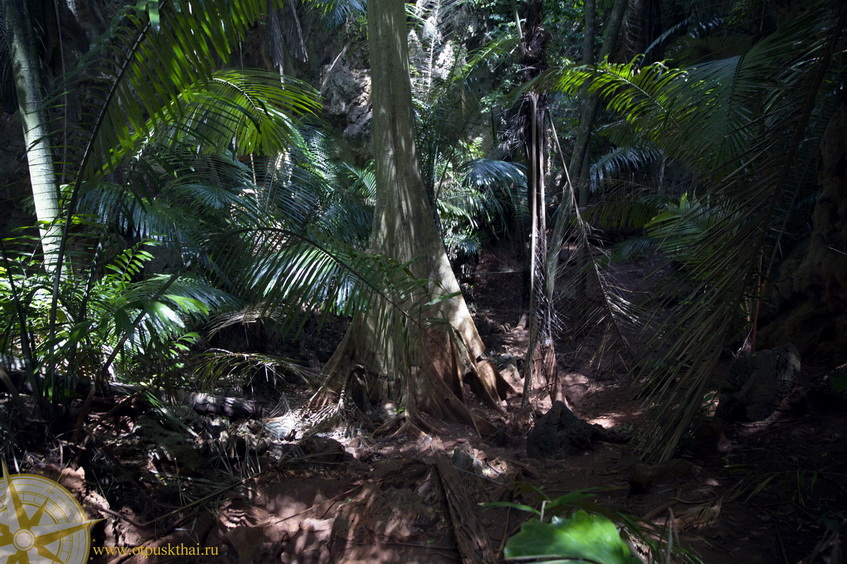 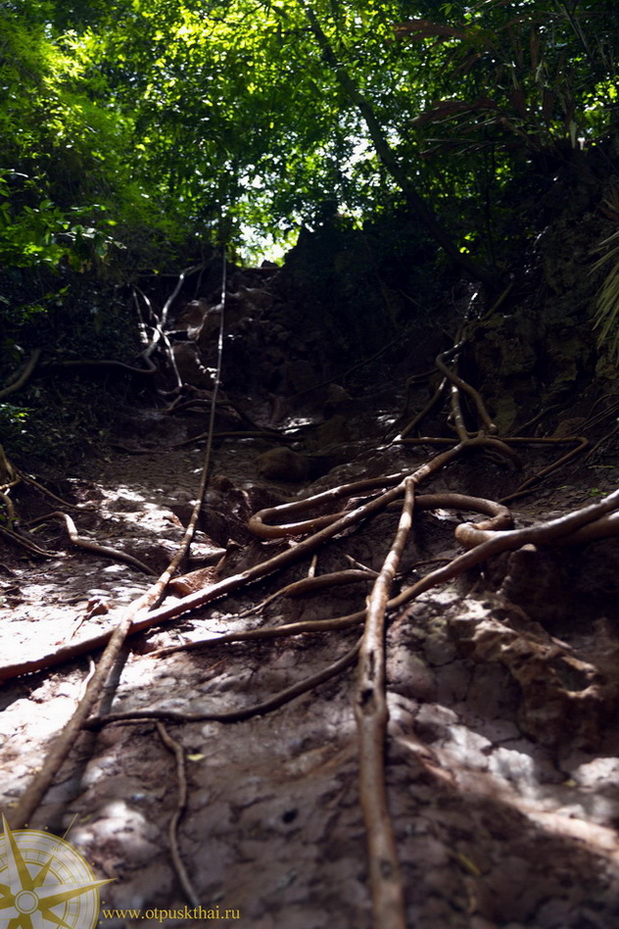 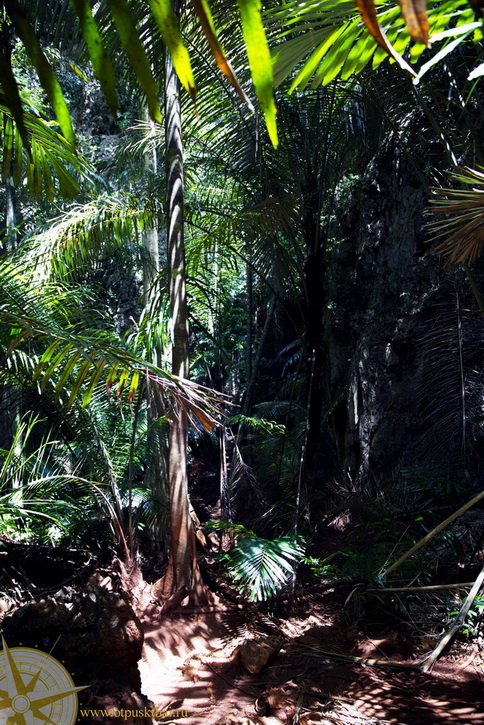 Here I will spend small comparison with a campaign of the husband. He told about two, a maximum four tourists who have got to it on a way. During our campaign there was a notice. The impression was made that we are in the middle of usual street where there-here walk having a rest. When there were 10 metres, we have come across all at once. 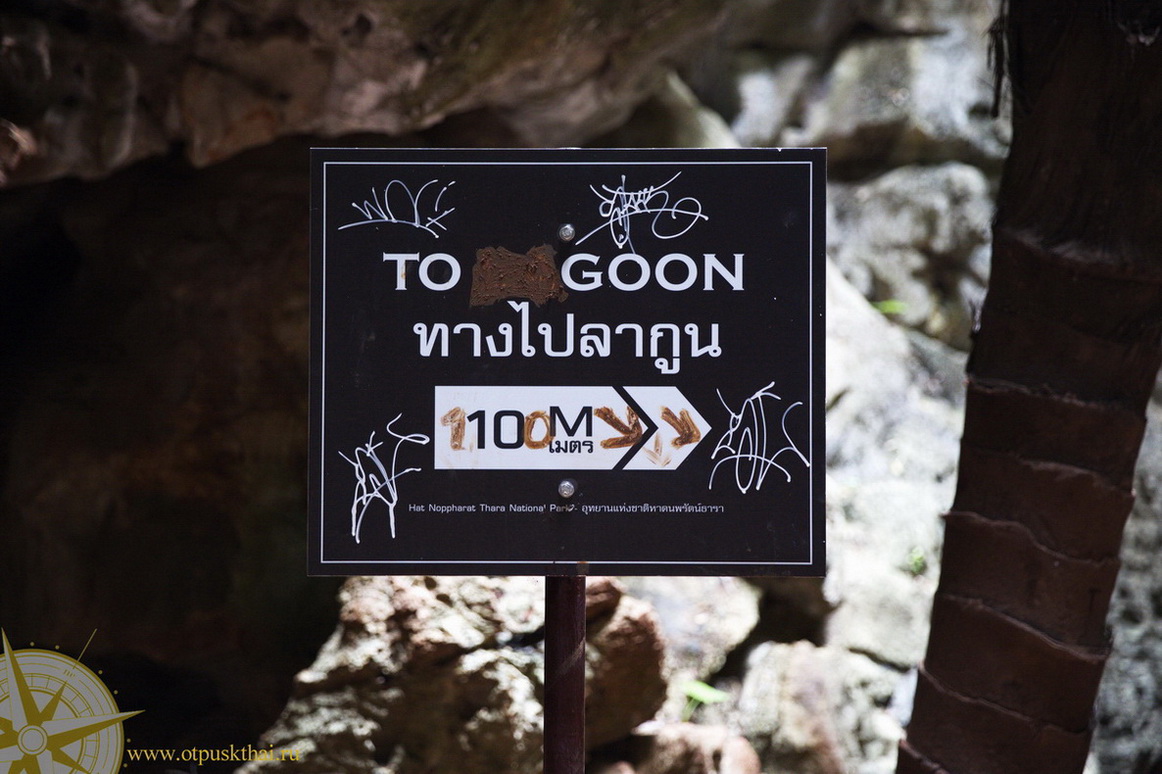 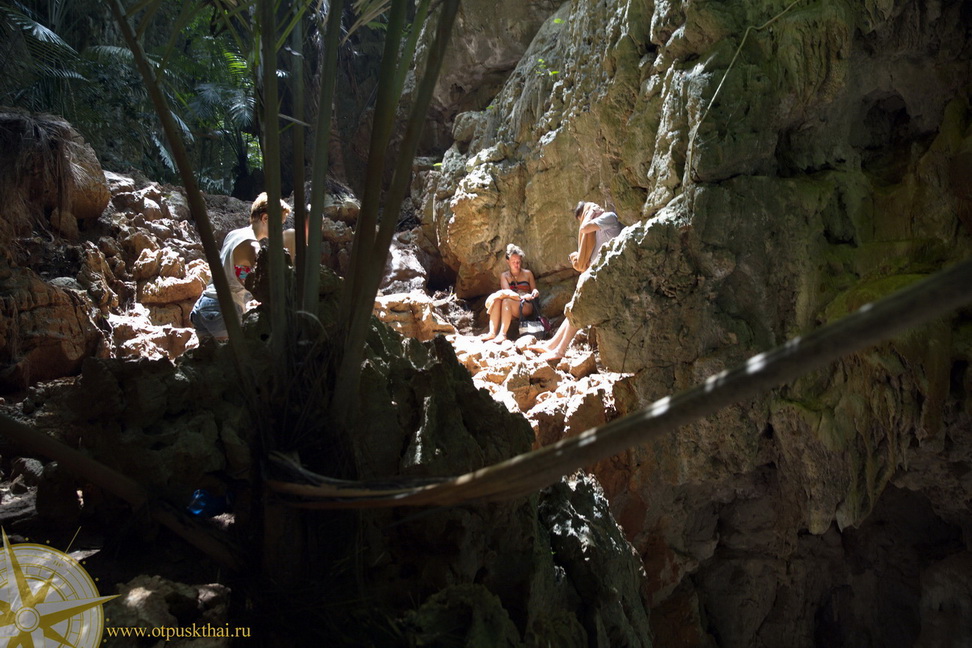 The chaos was formed before difficult descent to a lagoon. A surprise! With lifting on difficulty clay do not come to an end. The road through jungle deduces not to the lake. It breaks highly over it. Further on ropes, catching one hand at ledges and groping feet a support, it is necessary to slip downwards three flights. Dare at the such everyone can not. Someone and had to be content with the top views. Here we have lost a lot of time in expectation of turn and, passing those who rose towards. 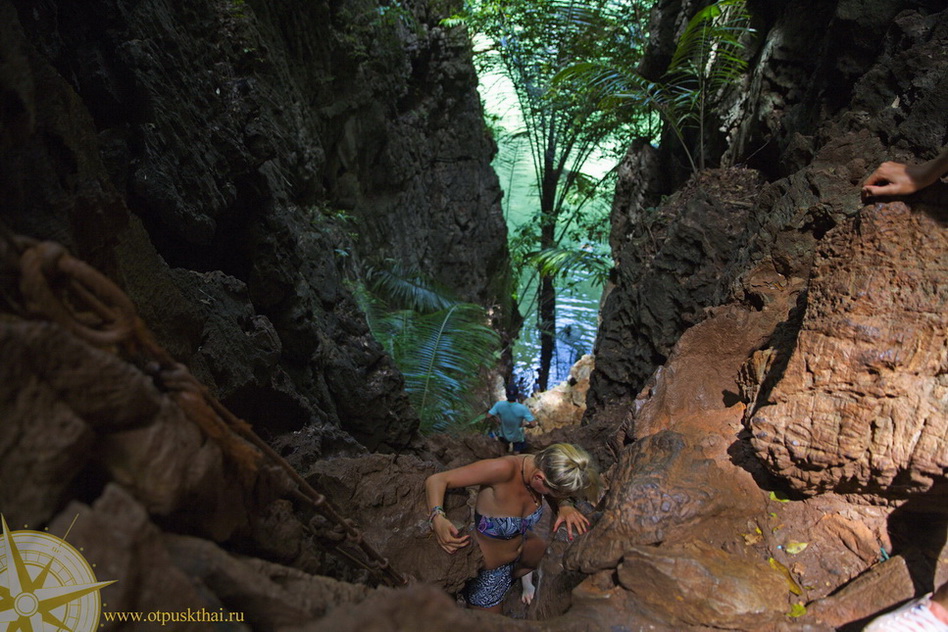 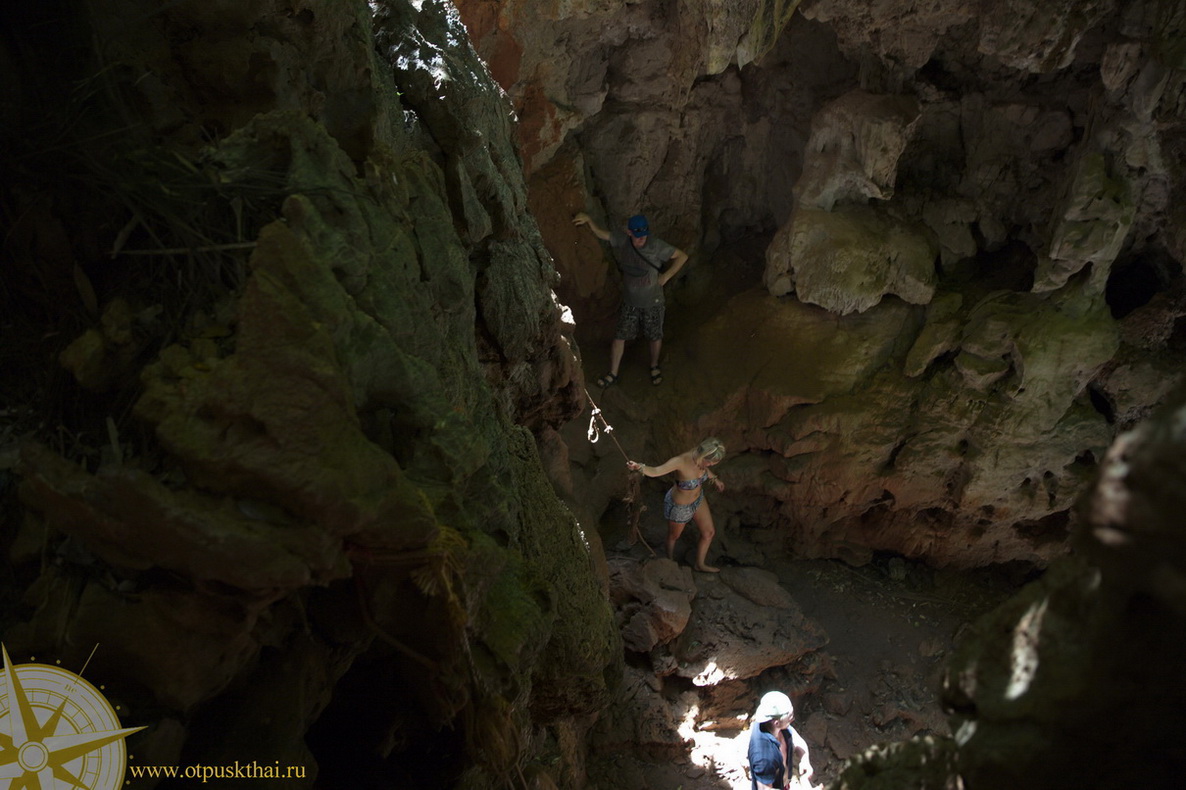 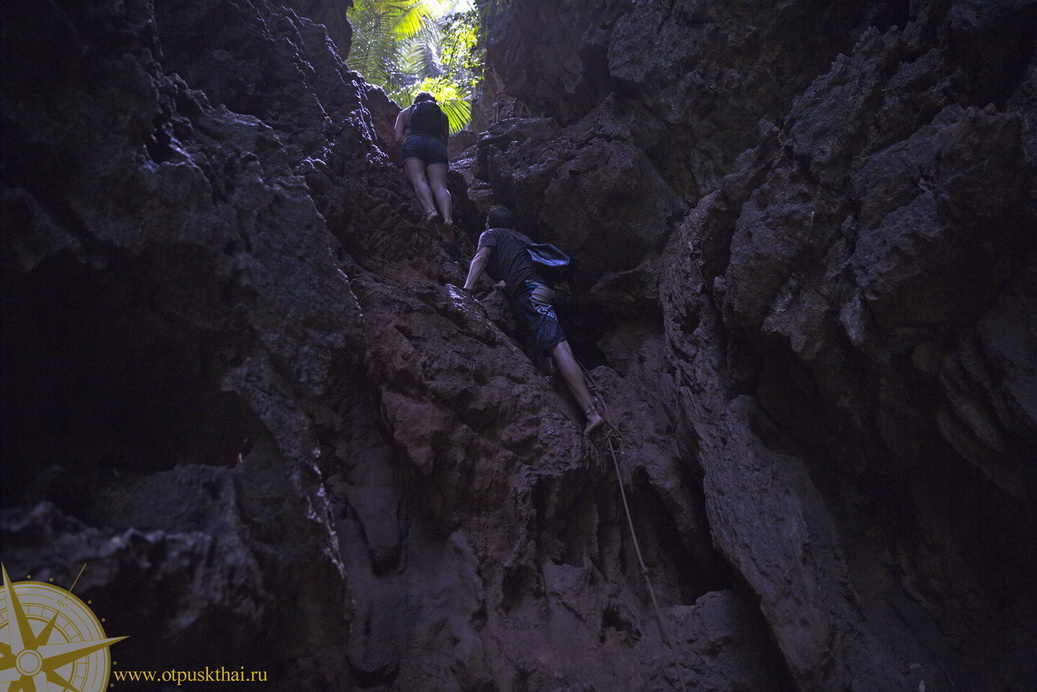 The second descent begins a hole in a rock. Climb through in it everyone who has appeared in this hard-to-reach spot can. People with very large figure hardly here will get to. But here backpacks behind shoulders force some to worry enough a little. The panic, fear and horror are visible in the eyes which have got stuck in an aperture on shares of seconds before having nestled by a stomach to a rock, they are easily liberated and climb further. Therefore on a platform before descent slaps, things, bags, packages and towels everywhere lie. So here to you on a note: in hands at you should be nothing. A small bottle of water which not superfluous will take with itself, it is better to lay in a small backpack or a bag on a belt. Prefer a photosoap tray and do not take with itself large and expensive photos – video units. Beach rugs, umbrellas, a cream from sunburn leave on a beach. 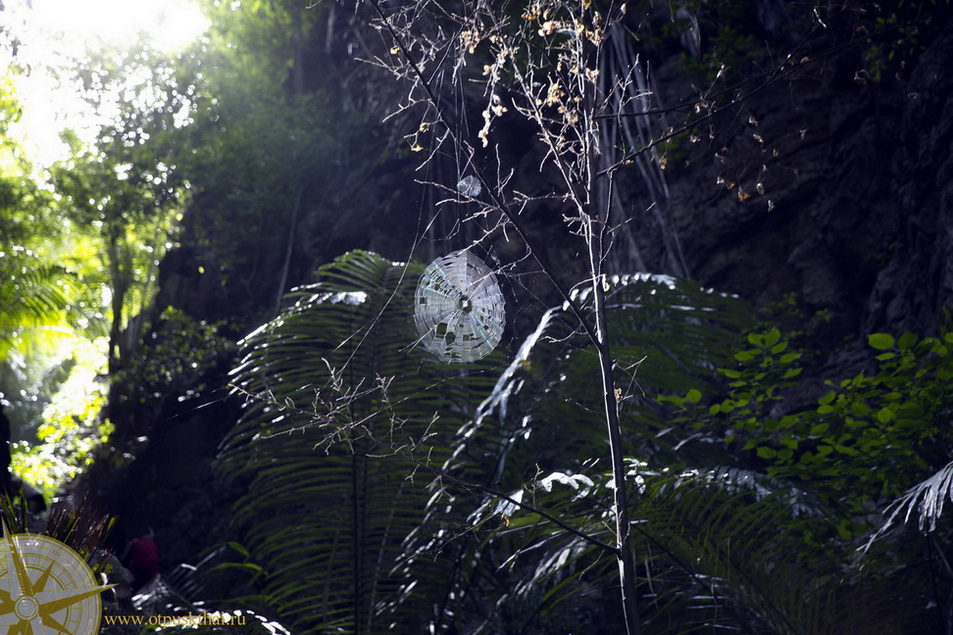 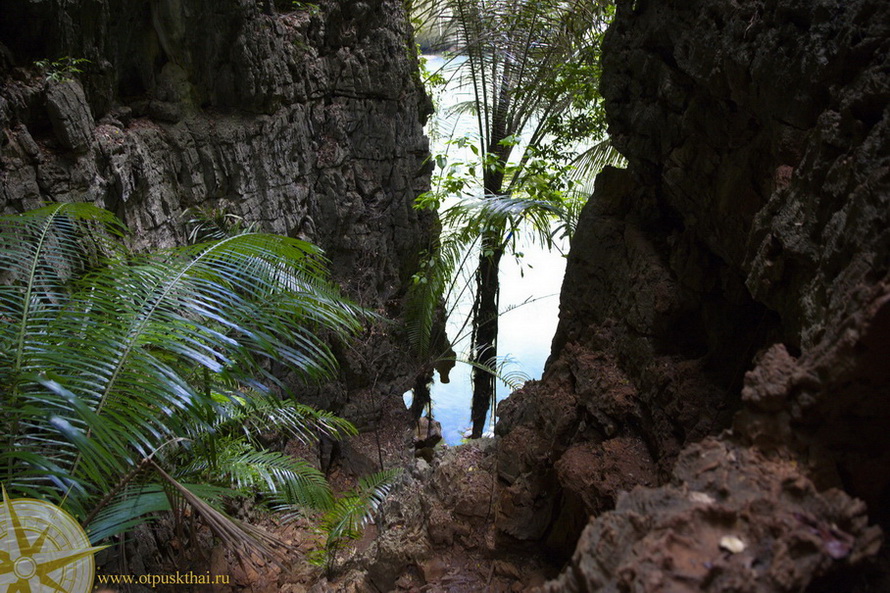 The monkey on a horoscope, I felt on ropes, like a duck to water. So descents did not become for me a problem. Having reached Lake of the Princess, we have made some pictures from coast and have gone to bathe. For an entrance in water it is better to keep left side, on the right sharp stones. The bottom is covered by viscous clay, boulders on which it is possible to half-rise here and there come across. 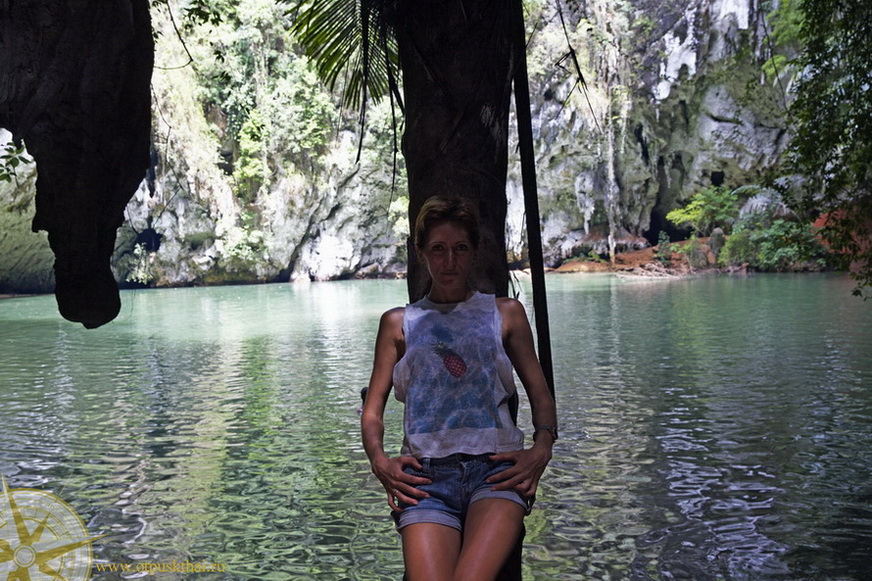 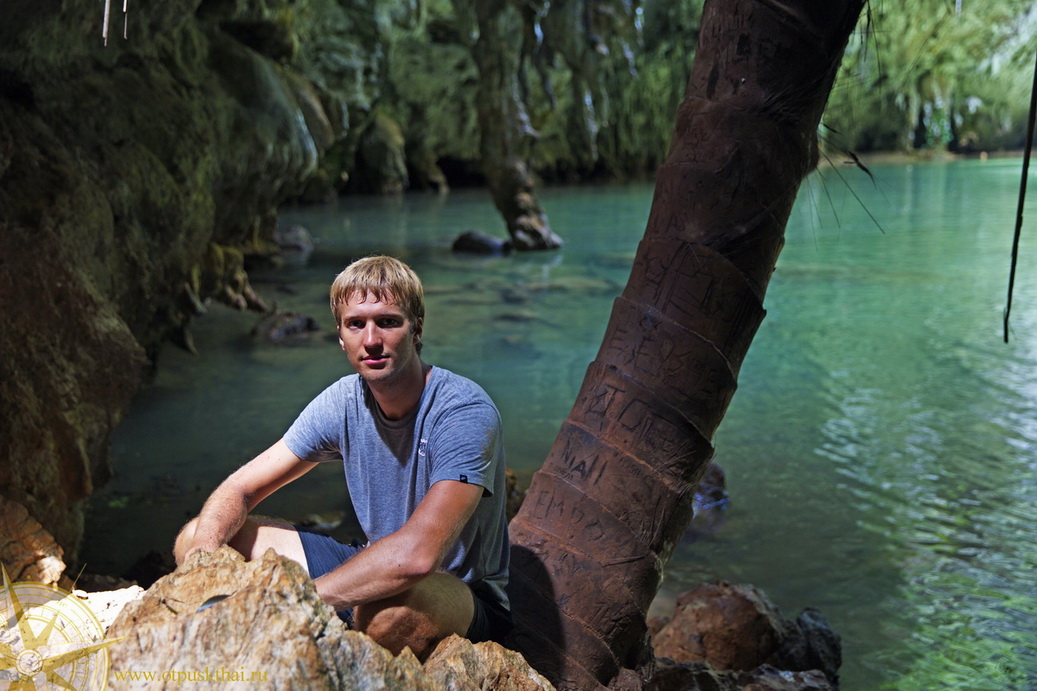 Can seem that this place for those who goes on difficulty for the sake of difficulties. But to come here costs not only for the sake of a portion of adrenaline and check of the abilities. It is enough to sail to the lake middle not to take offence any more at mountains that they so carefully hide this beauty from extraneous eyes. The rocks which have hung over a lagoon are covered by trees which wonderfully keep for naked stones. Huge ferns look as in a film about Liliputians. But to tell that it is possible to see the eyes any optics it is not capable. Anyway, examining all alive, you perceive it also as an award for overcoming of obstacles. From usual viewing of photos being at home admiration completely not such, it is checked up on itself. 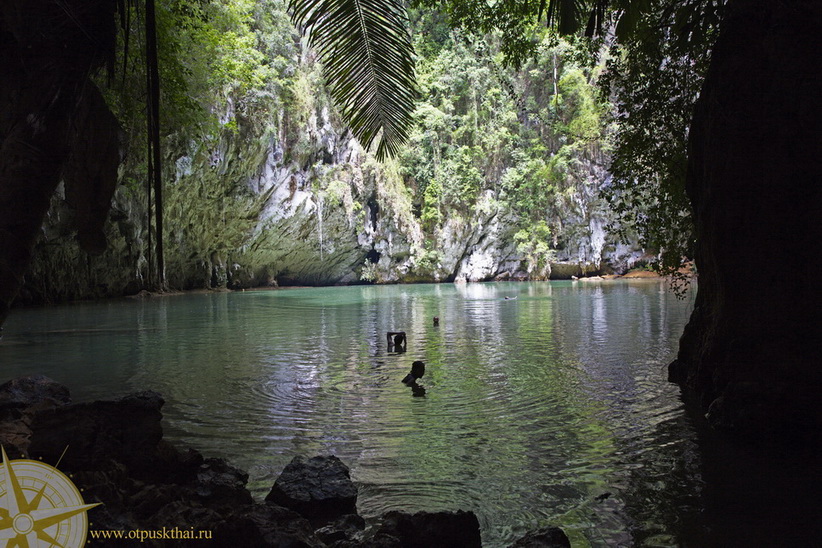 In a lagoon an echo the thunder has responded. It is necessary to tell that here as in a decanter, the sound amplifies and gets frightening loudness. We have hastened to retire. During a rain the road becomes impassable. The people by this time have already run up. Having used a case, we had time to do pictures. 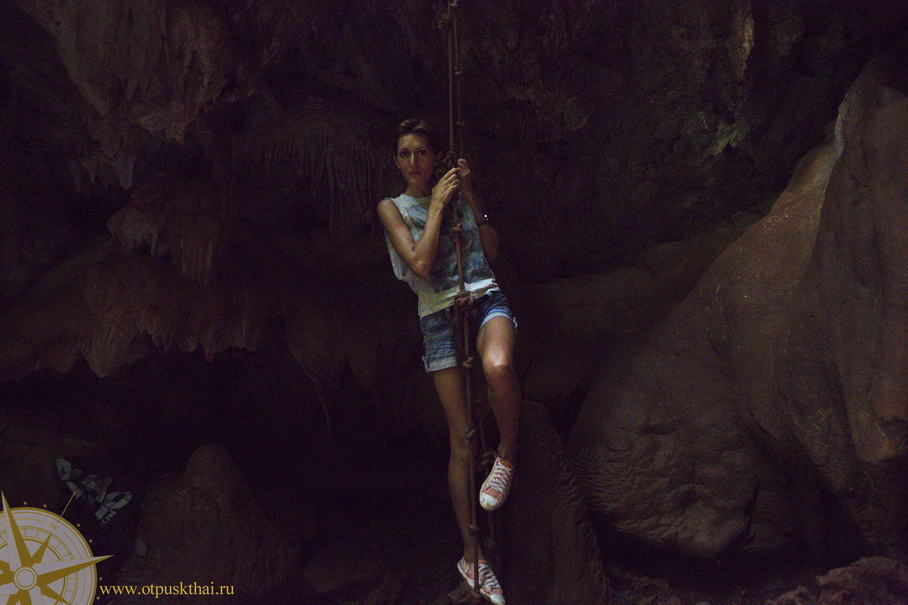 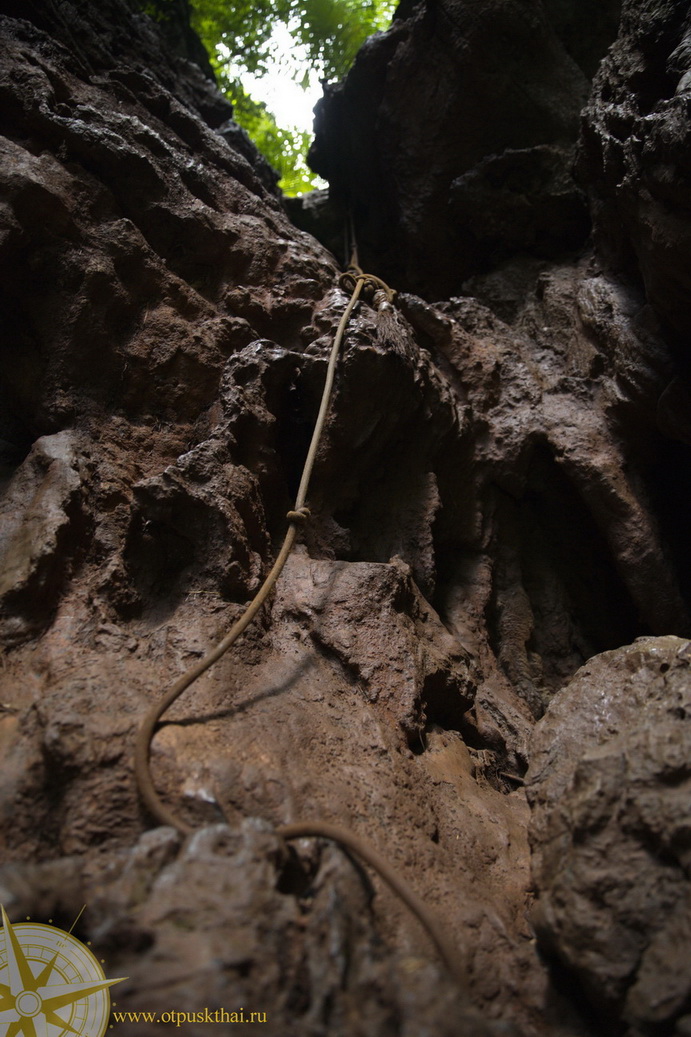 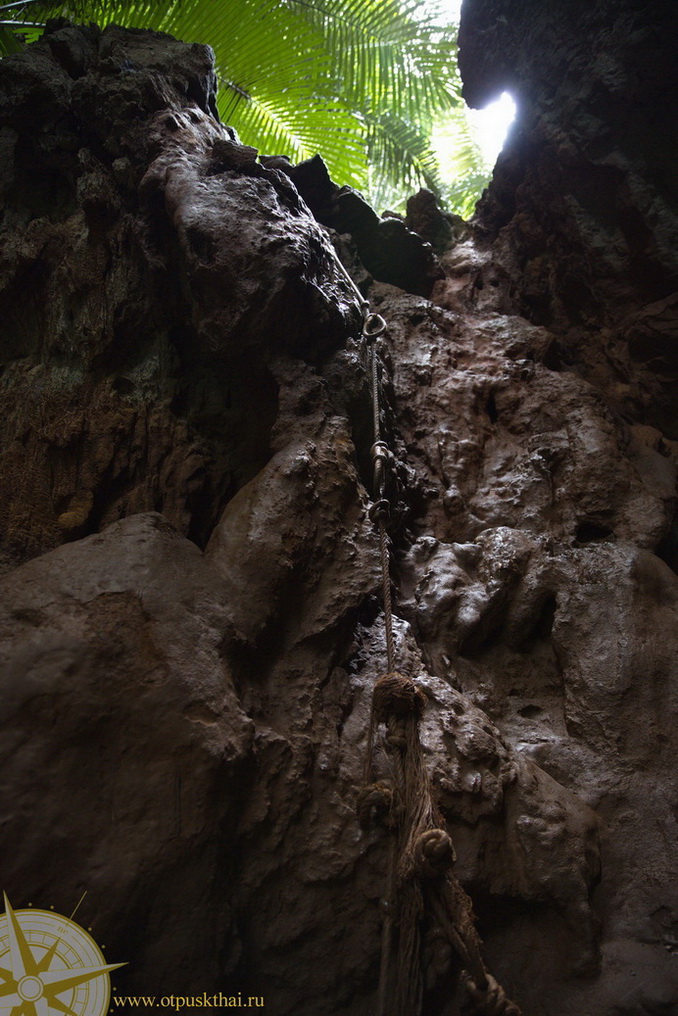 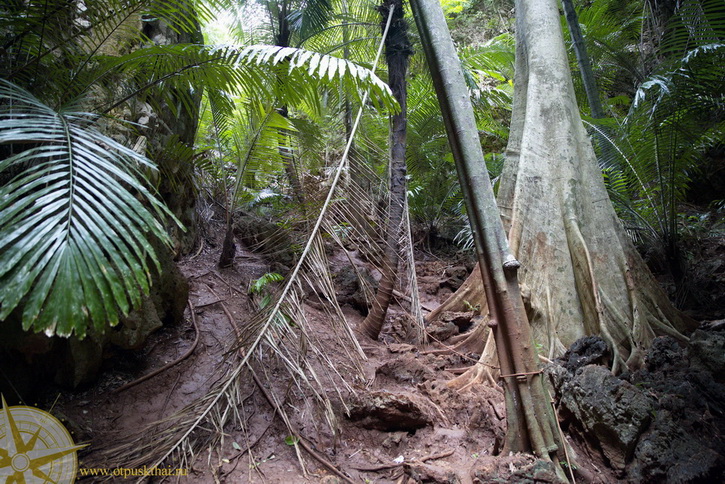 On a way back, going down on stones, I have noticed below someone’s striped tail which has disappeared under a stone, and have heard rustling. Fortunately the tail belonged to a monitor lizard. It quickly climbed up on vertical stones, releasing us a footpath. A short step, a jump and we below. We have made it! 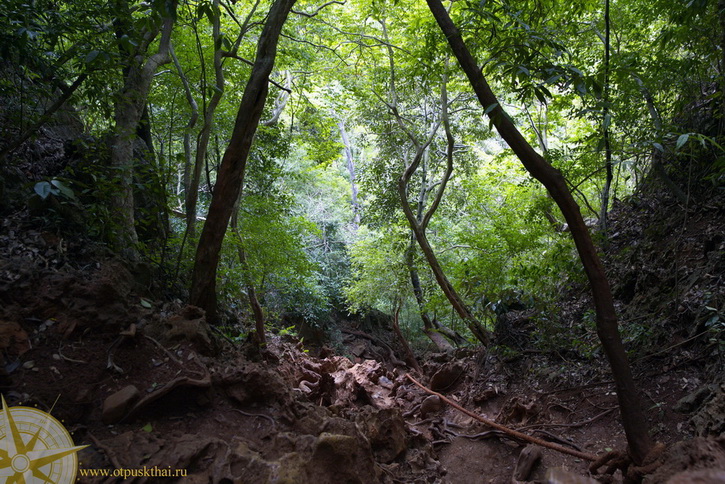 On road at us cunningly exactly two and a half an hour. On a footpath which conducts on a beach, towards already there was my husband with the son. In the company with our active child it seemed to it that we went the whole eternity. For us time has flown by imperceptibly. Anyway, on a campaign at the Vitaly too has left not less than two hours. We have returned on a beach to bathe after descent and behind things. At this time we were waited by the second meeting for this week with tornadoes. One of whirlwinds has got to the sea and has lifted a water column. While someone observed of us from the sky. Here that I name “terribly beautifully”. 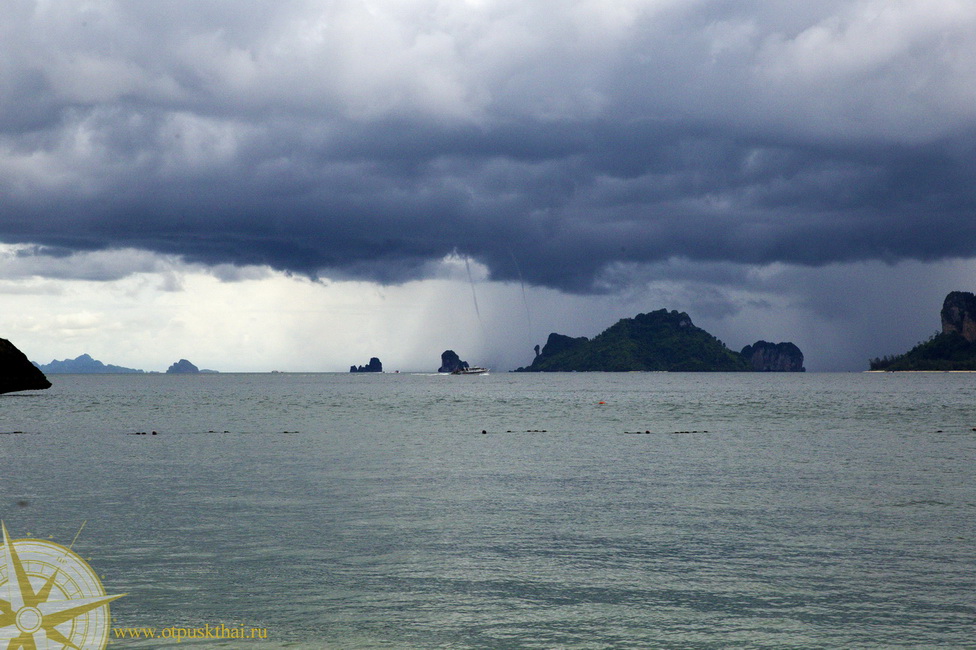 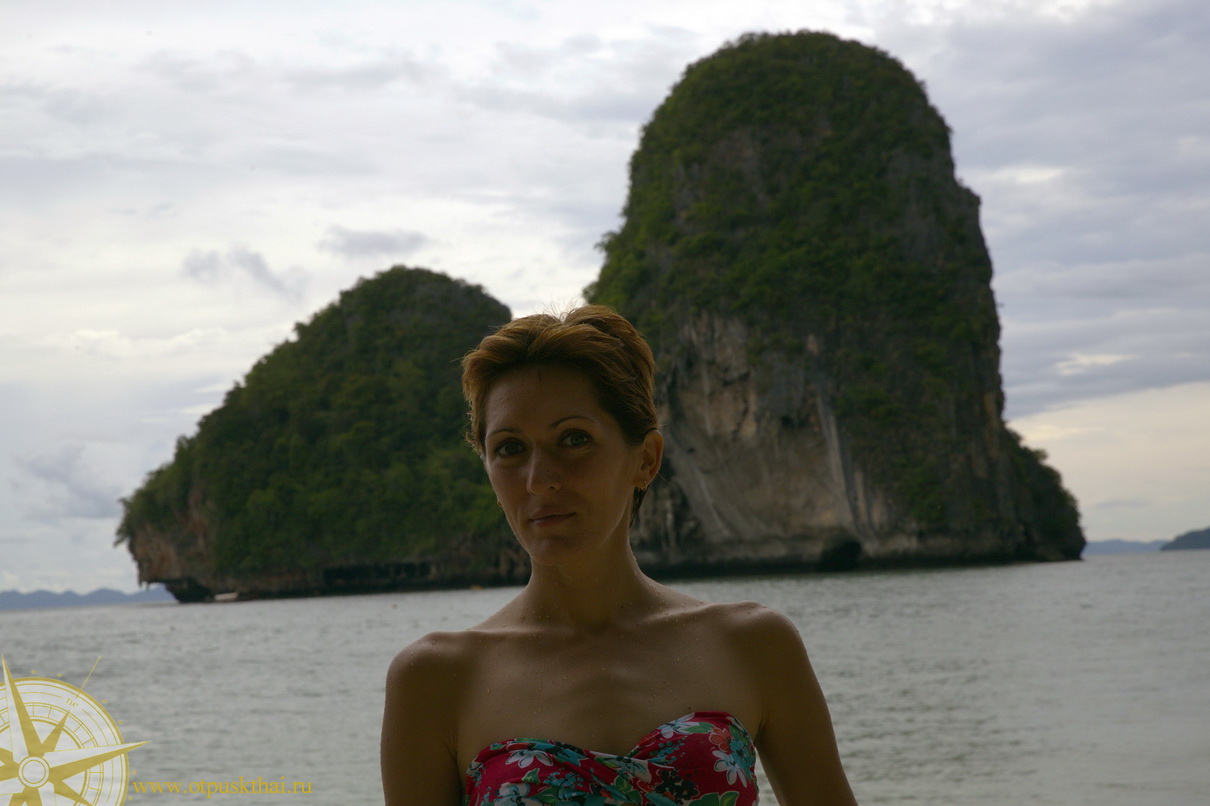 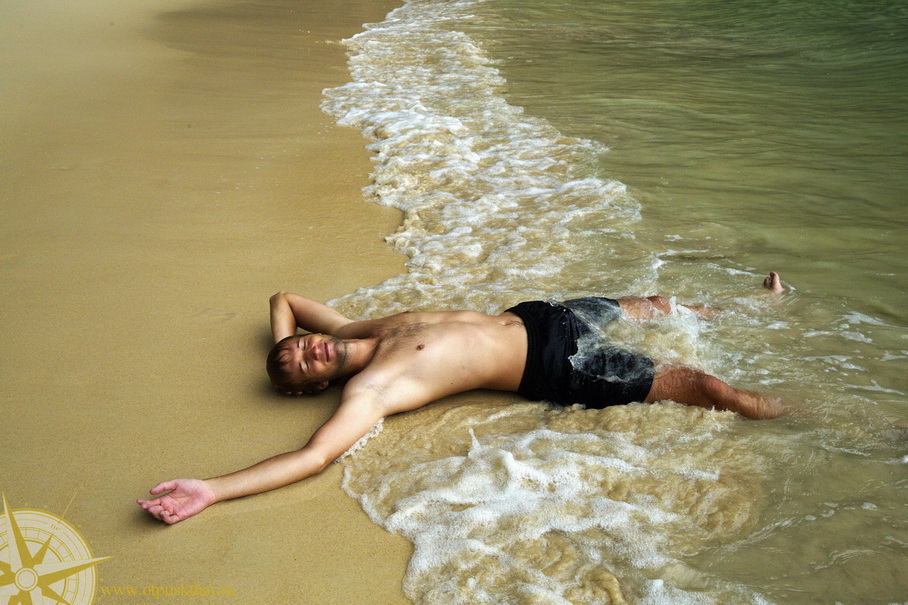 The rain in an Ao Nang has found us when we left a boat. We had time to get to to the house and even to buy products by a supper by then when it has watered as from a bucket. So with confidence it is possible to tell that day has passed successfully!